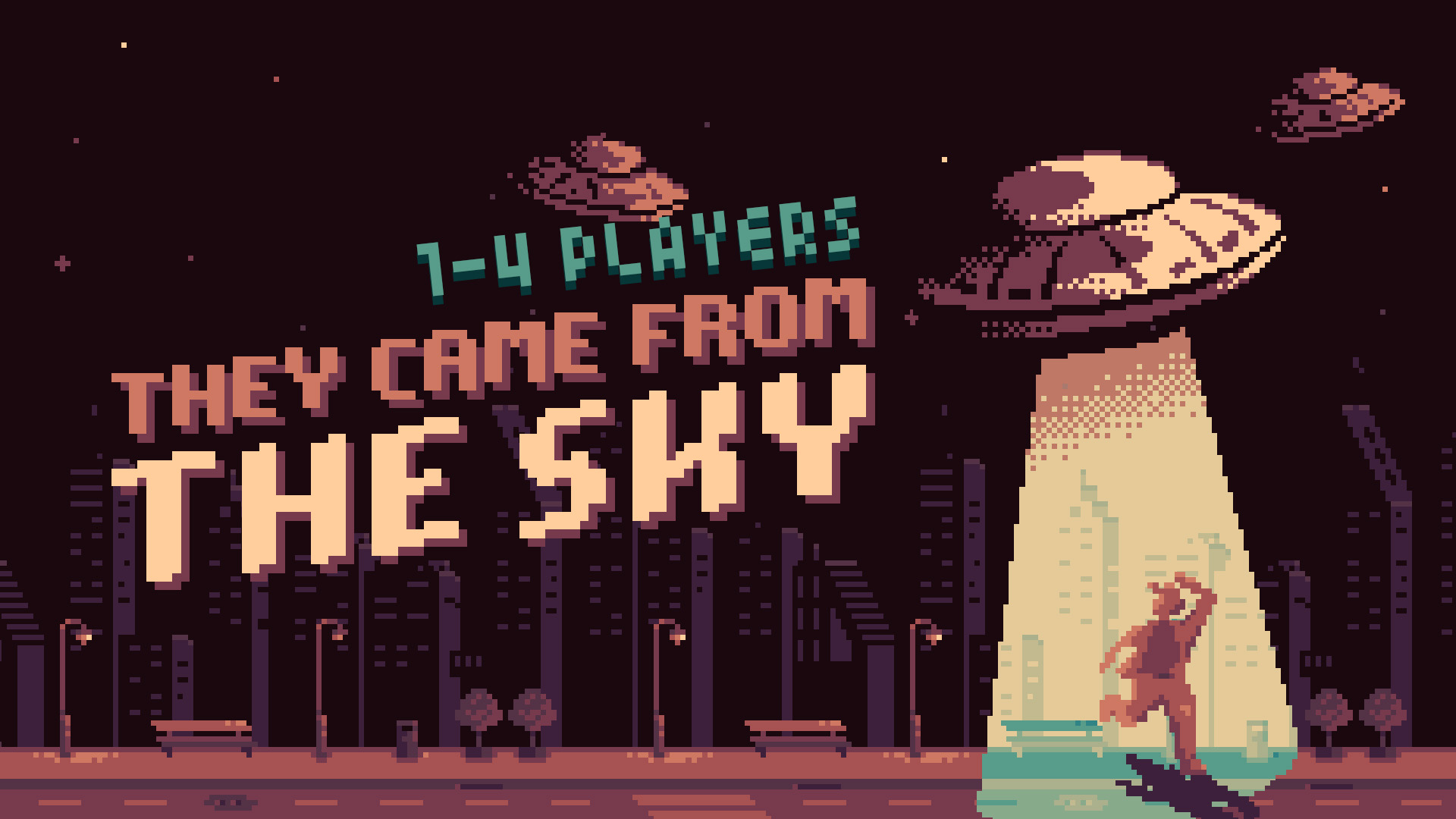 They Came From The Sky Review | Nintendo Switch

They Came From The Sky is a retro arcade game for the Nintendo Switch. It features an old school look, simple controls and one singular goal: Abduct as many humans as possible onto a selection of spaceships. In the process of doing this the player can rack up combos for extra points, use a selection of power ups and earn coins to unlock new ships.

From a game play perspective, They Came From The Sky is an incredibly simple title. The player can press a single button and fire a laser at the ground, in an attempt to abduct humans that constantly walk on the pathway below. Pressing that same button also changes the direction of your spaceship, which constantly passes back and forth across the screen. This lends the game much more of a ‘timing’ feel than other titles, most of which allow you to directly control the location of your unit.

Initially this feels relentlessly simple and restrictive, but it does open up somewhat: Power ups play their part in making things interesting, adding things like a warp drive that speeds up your ship, or a shield to protect yourself. Why would you need a shield you might ask? Well, the human race isn’t going to be happy about this attempted mass abduction, so they will attempt to shoot you down with a variety of weapons.

Therein lies the difficulty of the game: It’s all about that ship control. Can you pay attention to both your potential abductees and the impending dangers to your unit, with only one button assigned to both? It’s a tense affair that’s for sure, and it’s certainly makes for a compulsive game play experience, but if we’re honest there could be a dash more depth in there somewhere. Something like Downwell, a similarly restrictive game, manages to squeeze a huge amount of innovation into it’s tiny world, and we can’t help but think that a little more novelty here would have gone a long way.

As shown, They Came From The Sky goes for a highly retro aesthetic, evoking memories of classic arcade games. Galaga specifically comes to mind, though we must admit that the variety of humans you’re attempting to abduct specifically reminded us of the very early NES times, where limbs are reduced to one or two pixels max.

Animations are a step up, happily, with puffs of smoke and abduction animations smoothly indicating their use. Our favourite use of these however, comes from an unlikely source: The backgrounds. You can choose from a small variety of BG to play in front of, but by far our favourite has to be the Godzilla choice, in which the giant prehistoric one will walk through the city you’re assaulting.

Given such a small title and it’s clear inspiration, we weren’t expecting miracles when it came to an audio experience, and as such we weren’t disappointed. It’s a fairly basic affair, with a very quiet audio track playing in the background as the sound gets dominated by the wailing and screaming of your victims. It’s not unsatisfying, in fact we’re almost reminded of War of the Worlds with this choice in particular, but it’s hardly spectacular, especially by today’s standards.

Genre fans aren’t likely to be blown away, but if you’re really into that hyper-retro feel then this certainly emulates it. It’s about as arcade as it gets, which is nice for a session or two, but you’re probably going to part with more cash than you would at an actual arcade, despite the small price. It’s not without value, and it’s impressive given the singular developer, but it doesn’t quite do it for us.

It’s hard to recommend They Came From The Sky to gamers outside of the genre bubble. It’s tremendously basic and whilst that doesn’t mean it can’t be fun, you’re not going to get any semblance of depth from it. Without that urge to chase high scores that comes with being a genre fan, the game is reduced to a bit of a novelty: Interesting to look at and play with for 30 minutes or so, but little else.