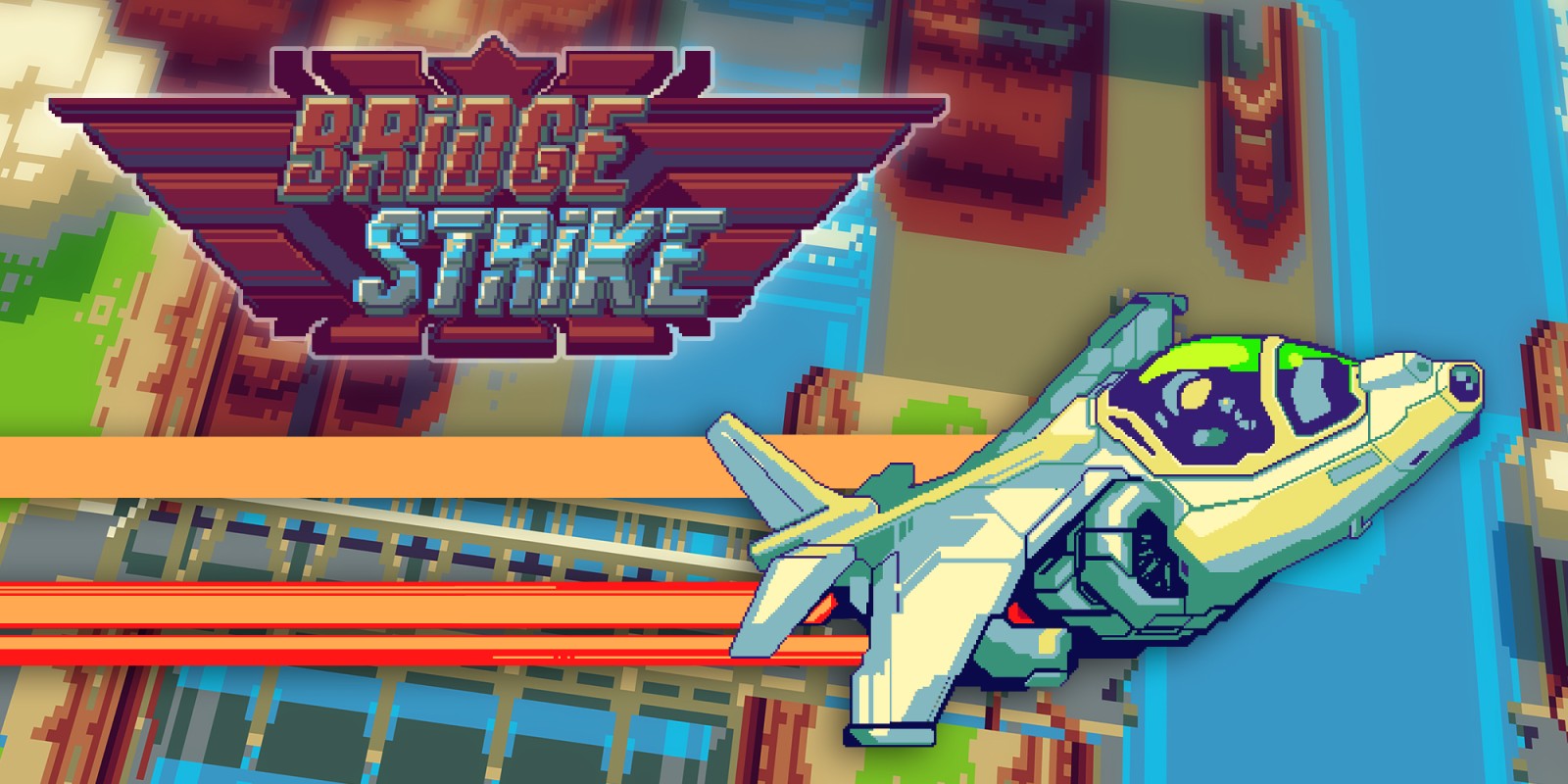 Today we review Bridge Strike, which is the spiritual successor to the classic Atari 2600 title, River Raid. It’s a top down shoot em up that features multiple player controlled vehicles, and is positioned as a homage to its retro inspiration. The game features novel sprite based graphics, a chiptune soundtrack and an unusual cockpit view, all designed to immerse avid arcade game fans.

Upon picking up Bridge Strike you’ll immediately notice its simplicity: You’re given two controls to take care of – move and fire – before being thrown into the action, quick as can be. The plane that you’re controlling will gradually make its way up river as the screen scrolls, and you’ll start to encounter some obstacles, namely enemy ships, planes and the titular bridges. All of these can be turned to dust by your missiles, and in doing so you’ll earn coins. It’s simple yet satisfying: Every tiny explosion feels chunky and meaningful, and the little celebratory speech bubble of your pilot lends a little more meaning to some of your targets.

Eagle eyed readers will have noticed a little something more in our screenshots too, namely the inclusion of a green bar at the top of the screen and the cockpit surrounding the screen. Firstly, the bar indicates your remaining fuel, which must be topped up at carriers positioned on the river. If you’re anything like us, you’ll also soon discover that you can blow these up with an errant missile, much to the chagrin of your pilot. Secondly, the cockpit isn’t just there for show – by pulling down on the analogue stick, the screen will shift slightly and allow you to either shoot forward, or pull back and halt your vehicle. This proves critical throughout the entirety of the game, allowing you to gather more fuel or dodge the true dangers of Bridge Strike: Horizontal enemies that dash across the screen. This system is the true skill that will require mastery: It may not sound like much, but blazing forward or holding back makes all the difference.

To build on this simplicity the developers have included a campaign that will take you to differing locales replete with their own weather features, and the ability to purchase different vehicles with your hard earned coins – even river dwelling options, which serve to spice things up a little further. It remains resolutely simple in spite of all of this – there is only so much you can do with one fire button after all – but that doesn’t mean that it isn’t fun. It’s not revolutionary, and it’s certainly not going to win awards for it’s depth, or indeed difficulty, but for a shooter so barren of actual shooting options, it’s thoroughly enjoyable.

Like us, you were probably initially drawn to Bridge Strike by the visuals. The sprite work is truly fantastic and we’re happy to report that it remains so throughout. It takes some truly talented artists to give otherwise inanimate objects personality, but they’ve somehow managed it here, each run somehow managing to feel smooth and organic in nature. We kept expecting the veil to drop as new enemies and features were introduced, yet they each arrived with a subtle but functionary design, their intentions easily discerned.

It’s not without it’s weak points however: We’re not sure the inclusion of 3D models are entirely necessary: Its quite grating to shuffle off to spend your coins, only to find that the vehicle models have been reduced to a blocky, almost minecraft-esque existence. They return to their full glory whilst in game, but we’d have loved to be able to scroll through them in their 2D, spritely state.

The music too is a bit of a sore point for us. Of course, a title like this is going to have chiptune – we probably would have put money on this being the case beforehand – yet our problem is not with the choice of tunes, rather with the volume. Even with the slider slammed up to full, it’s really not loud enough. The mechanics of the game feature some satisfying sound effects for sure, but once you’re hip deep in a shoot em up and you’ve heard the same explosions a thousand times over, it would be nice to pump up the volume and get in the zone. Yes we could tune the effects down and ramp up the TV to 11, but that’s a disaster waiting to happen.

We really enjoyed our time with Bridge Strike, but even we will admit that it’s not going to approach genre legends such as Ikaruga, Tyrian or Raiden. It’s missing an ‘X’ factor that sees it fall slightly short of those names, like an extra layer of power up perhaps, or increased enemy variation. Veterans may find themselves getting one good play through done before putting it down for good, though we’d still argue it’s great value for money in that regard.

Overall we’d actually recommend Bridge Strike for the more general gamer. It’s rare that top scrolling shoot em ups are released these days, never mind one with the qualities on display here. It’s clear that the developers have put a great deal of effort in, and if you’re a gamer that just likes playing a fun arcade game, it’s hard to go wrong here.